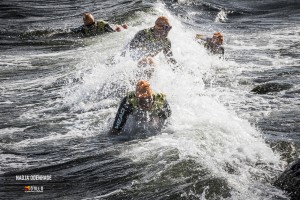 ÖTILLÖ – one of the world’s toughest endurance races

21 hours after the alarm went off at four o’clock this morning, I have to write these words.

About 75 kilometres of running and swimming.

About three mobile teams with varying levels of coverage .

About 240 athletes of wildly differing ability.

And about filling twelve hours of live commentary with it all.

Ever since I first commentated on ÖTILLÖ – the world championship race of the fast-growing sport of swimrun – last year, people have asked me how I can manage to present and commentate for twelve hours, almost non-stop.

My answer is that we in the production team from FKDV are storytellers – and in fact, twelve hours is nowhere near enough.

As dawn hid just over the horizon yesterday morning we rehearsed our opening script.

We delivered it live at 0545 – after that, the next twelve hours were a blank canvas.

There is always those few moments of trepidation before the start, but a quick look down at the scribbled notes always reassures.

Because the race that is ÖTILLÖ is not just one story – it is hundreds of heroic narratives, and it is our privilege to be given twelve hours to weave them together into as much magic and drama as we possibly can.

The narratives are classical, modern and almost too numerous to mention – racing in pairs, swimming in jogging shoes and running in wetsuits from dawn to dusk, they tell of man’s battle against nature, against his opponents, and ultimately against him or herself .

The limits of our physical, mental and emotional capacities are explored.

There is science, technology, meteorology.

And as if that is not enough, there are the 240 individual stories of the athletes that make up the 120 teams that gathered on the start line at Sandhamn 75 kilometres away.

The first great story yesterday was the wind. Our commentary position – in reality a tent that would grace any decent garden party – was battered by gale-force winds all day.

Indeed, when we arrived at around 0430 the entire scaffolding around the finish line had blown over, and such was the rain the night before one of our crew got a nasty electric shock.

The wind would prove decisive in the race, as well as providing tremendous images of what the athletes had to contend with – high, rolling waves that sometimes flipped them over. The wind became part of our canvas for the day.

The second great story was the island of Ornö.

For 364 days a year it is a sleepy summer paradise for tourists.

But on the first Monday of September it was transformed into a sporting crucible where the race was decided, the excitement almost unbearable as the leaders were slowly, inexorably reeled in and passed by as the competition took a dramatic turn.

Along its 20 kilometres of running trails, the dreams of some were crushed and broken on Ornö, while the dreams of others rose from the ashes, spurring them on.

And of course, the greatest story of all was the people. 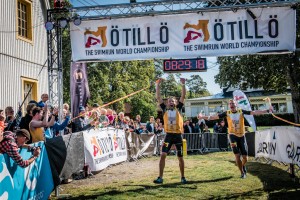 In 2014 I had interviewed them just past the finish line, and they smelled of damp and dirt and disappointment, having come in second place.

But this year, having mounted a tremendous fightback on Ornö they had gone one better, elation and exhaustion were mixed in a heady brew as they joined me in the studio.

Then there was Marika Wagner and Staffan Björkstrand in the mixed class. Marika’s response to last year’s second place was to come out and smash the course to pieces, becoming the first woman to complete it in less than nine hours and fifth overall, winning the mixed class by an enormous margin.

Staffan told of how Marika had said that only the gold medal would be good enough. They dug deep – very deep – to mine it.

The winners in the women’s class were another classic story – Maya Tesch and Annika Ericsson were thrown together a week before and had trained together once, and very briefly at that.

Then they set off at dawn and hammered the course and all its cruelties, finding themselves in a surprising lead and then keeping up the punishing pace to ensure they never relinquished it.

As broadcaster and journalists it is our job to find stories, to tell them and to put them into their proper context. Nowhere is this easier than in the field of sports, and no race is easier to find stories in than ÖTILLÖ.

There are 10,000 islands in the Stockholm archipelago, and the stories that they form the backdrop for on the first Monday in September every year are almost as numerous and beautiful and exciting as the islands themselves.

So the question is not how to fill 12 hours of broadcasting and commentary – the question is how we can find more and better ways to bring these epic and heroic tales to the audience they so richly deserve.

My thanks to race director Michael Lemmell and to Robin Danehav, Björn Falkevik and the amazing team at FKDV whose superb video production is an essential element in telling the story of ÖTIILÖ.