This piece on Irish defender Louise Quinn and the Swedish Damallsvenskan title race is published here under a Creative Commons License.

It may be reproduced in whole or part and the images and video re-used with attribution, and I would request that in return, any commercial media outlet seeking to reproduce it, or indeed any reader enjoying the chance to follow a successful Irish international player close up, make a suitable donation to the Marie Keating Foundation or the Rosa Bandet campaign here in Sweden. 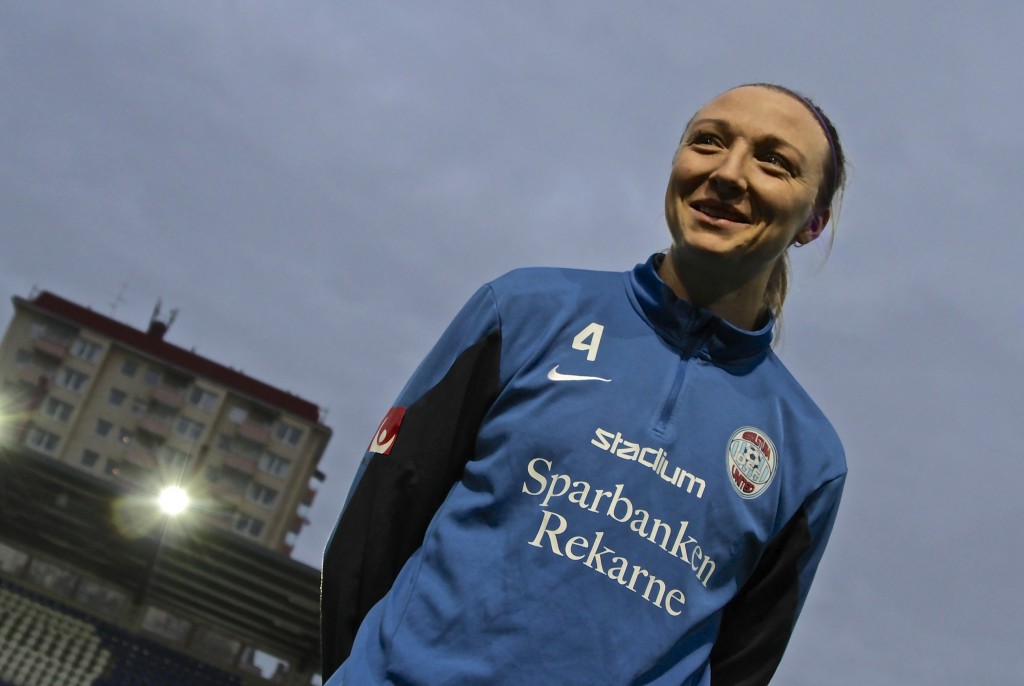 “But when Quinn the Eskimo gets here/Everybody’s gonna jump for joy” – Louise Quinn in a chilly Eskilstuna.

You’ll not see nothing

The once-ubiquitous chant at Irish football matches echoes once more across the terraces – but this time it’s for a different Irish international.

And it’s a long way from Landsdowne Road.

For one thing, the fans singing it and waving flags are dressed in the blue shirts of Eskilstuna, title contenders in Sweden’s top-flight women’s league, the Damallsvenskan.

Quinn in action against AIK

The object of their affection is Louise Quinn, that rarest of breeds of Irish footballer – a centre back with a chance of winning a league title and qualifying for the Champions League.

Quinn will be crowned champion if her side can beat Gothenburg and rivals FC Rosengård lose to Linköping on the last day of the season.

“We just have to go and win our game on Sunday and hope that other games go our way,” Quinn says following one of the final training sessions before the season’s deciding game.

With a few days to go before the title decider, Quinn is in the horrors, and not just because her side were held to a goalless draw against Linköping a couple of days earlier.

She expends so much energy on the pitch it takes her days to recover. 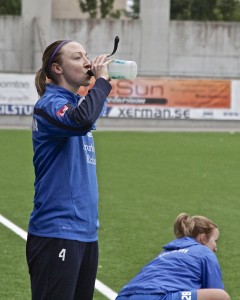 “It’s always worse on the second day after a game. The first day is not too bad but the second is awful,” she explains.

That goalless draw handed the initiative to FC Rosengard, the southern side with four league victories in the last five years.

Having blown their own title ambitions with the draw against Eskilstuna, Linkoping will have to do Quinn’s club the favour of beating the title favourites.

But Eskilstuna haven’t given up hope – “Linköping are their bogey side,” says virtually everyone I meet at Eskilstuna’s home ground of Tunavallen, one of the venues when Sweden hosted the World Cup in 1958.

Either way, the single-minded Quinn doesn’t care what happens in that game.

“We can’t think about that. We’ve just got to make sure that we at least seal a Champions League spot which we can do if we win or draw on Sunday, but we’ll be going for the win.”

Eskilstuna have been one of the surprise packages in a tight, thrilling season, with Quinn and her teammates dominating opponents in a manner few predicted before the season began.

“It’s been amazing, it’s changed me as a player,” the Wicklow native says of her move north.

“This is my third season, and especially this year I’ve learned so much. We have a great coach and a great set of players. My game has just developed so much, it’s done wonders for me.”

Eskilstuna coach Viktor Eriksson is full of praise for his defensive lynchpin – and not just this season.

“Louise has been an important player for us for several years,” he says. “She has developed her play enormously since her first season in 2013, and she is now one of the best defenders in the Damallsvenskan.”

Well able to read the game and not afraid to stick a head or a foot in where others might think twice, Quinn seems to thrive in Eriksson’s training sessions – virtually everything happens with the ball, urging her to take responsibility when starting attacks.

“She contributes first and foremost with her play, but she’s also a leader who is important for the group,” says Eriksson. 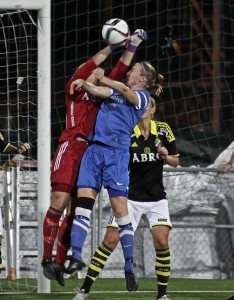 He is quick to praise the 25-year-old, but he also hints at a need for the six-footer to be as dominant in the opposition penalty area as she is in her own. It is this attention to detail, the constant striving to be better, that has brought the team to the top echelons of the table.

For Quinn, leaving Ireland and coming to Sweden was a gamble which was daunting at first, but it has paid off handsomely.

“The standard is very, very high,” she says. “The majority of players in the league are professional players, so this is what they do day in, day out – training five and six times a week and then a competitive game at the weekend.”

Every week, it’s the same – when the 25-year-old takes the field with Eskilstuna she meets some of the best players in the world.

But it’s not just the big names you have to watch out for, says Quinn.

“There is no real weak team in this league. You go into every game if you’re top of the table and you’re playing the teams at the bottom of the table, it’s going to be a competitive game.”

Quinn’s team are no slouches either. She lines up alongside the likes of outrageously talented Swedish playmaker Olivia Schough, midfield motor Malin Diaz,  the vastly experienced Sweden international Sara Thunebro and the mercurial Cameroonian Gaelle Enganamouit, who scored a hat trick at this year’s World Cup in Canada.

For soccer fans in the small city of 65,000 – around the same population as Tallaght – their elite team in the top flight of women’s football is the only show in town, and this year they haven’t been disappointed. 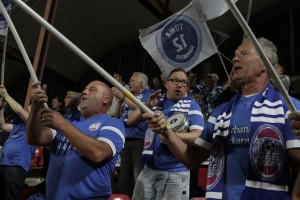 Busloads of supporters follow Quinn and her team the length and breadth of the country, and it is these ardent fans who sing “The Mighty Quinn” in her honour at every game.

They have been treated to a thrilling season spent battling it out at the top of one of the world’s most competitive female leagues, and Quinn doesn’t hesitate to recommend it to her Irish team-mates when they gather for internationals in Dublin.

“It’s been a nice transition, they’re very fond of speaking their English here as well, so that’s one part of coming to a foreign country, being able to understand a bit of the language,” says Quinn.

“Some of the Irish girls would be well able and it’s up to them if they want to make that commitment.”

For Quinn, playing full-time means committing one hundred per cent to the job.

“I was unsure if I was going to physically be able to do all the training that was happening, but you adapt. Now, this is what I can call my full-time job and thankfully I can get a salary off it. It’s not anything major but at least it’s nice to say that you’re getting paid for something that you love doing.”

Quinn is easy company, talkative and friendly, but as committed as they come.

As the autumn chill sweeps in with the darkness over the city, she’s in a hurry to get on her bike and cycle the few hundred yards home. 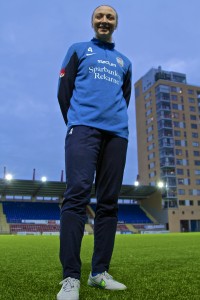 Standing tall – busloads of supporters follow Quinn and her team around the country.

When she gets there she’ll whip up something to eat before spending the rest of the evening and most of the following day resting and recovering for the big game.

There is time for one last question – would you rather win the Damallsvenskan or qualify for the Euros with Ireland?

“Ah stop…” she says, fumbling for words. She tries a few answers but the sentences tail off. None of them feel like they fit.

The Mighty Quinn wants it all.

And when she gets it, everybody in Irish and Swedish football’s gonna jump for joy.